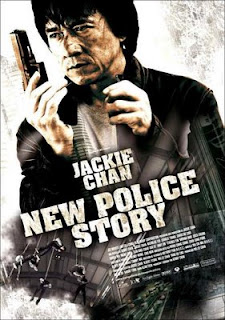 The story is given a new touch in `New Police Story.' This time Jackie plays a veteran Hong Kong police officer Wing, whose overconfidence leads to a botched raid. Feeling guilt deeply, Inspector Wing, now disgraced, is given to drink until a young `police detective' named Fung appears before him. With a help from Fung, Wing again begins to hunt the culprits responsible for the deaths of his men.

[NEW BREED OF VILLAINS] As in his `The Myth,' Jackie's answer to the recent boom of wuxia (Chinese period martial arts films), in `New Police Story' Jackie Chan clearly intends to do something different. The baddies of the new film are a bunch of masked young gangsters, who can rob and kill as if it is a video game. As a fan of Jackie's actions, I can swear that this is very unusual choice. For in many cases the villains of his films may have been assassins or gangsters, but they never acted like spoiled kids. It is certain that deaths are sometimes depicted, but not in this violent way. Violent, in this case I mean, for Jackie's film. The decision of director Benny Chan (`Who Am I?') would divide the viewers' opinions, but it is certain that he and Jackie are trying to seek a new direction.

[ACTIONS] But you want to know the actions. Good news is that Jackie is still alert and agile, and can move like when he was in his first `Rush Hour.' Considering the fact that he is now over fifty, this is just incredible. There are two outstanding scenes here; one is Jackie climbing down the vertical wall of a tall building in a very unique (and dangerous) way, followed by Jackie hanging on the roof of a runaway bus in the street of Hong Kong. The other is in a Lego showroom, where he shows a bone-crunching fighting against one of the baddie.

[ACTING] This may not interest you, but Jackie does another new thing, and that is acting. Well, of course he must have been doing that for long, I know, but what I mean is he takes more time to reveal the complex nature of the character he plays, to show his ability as actor. There is even a love interest for his character.

[SUPPORTS] Some of Jackie film fans seem not to remember the names of the supports, or you just don't care. For `New Police Story' Jackie assembled great cast. Nicholas Tse as mysterious Fung is a standout among them, and so is Daniel Wu as the leader of the gangs. Among the fighting scenes, Andy On shines who was wasted in deplorable `Black Mask 2.' As to the female players, after the 8 years' retirement Charlie Yeung comes back as love of Jackie's inspector, giving the rather generic story a human touch, and very busy (and very cute) Charlene Choine from the popular duo Twins also appears.

`New Police Story' may not be the right place if you are going to see Jackie Chan films for the first time. It is overlong, sometime unnecessarily serious and violent, and Jackie's stunts, thrilling as they are, are not his best. Having said that, I must say it is a welcome addition to the works of one and only Jackie Chan, far better than any recent English-speaking films of his.
এর দ্বারা পোস্ট করা Alamin riaz